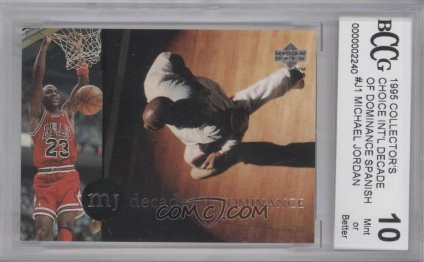 Have you cleaned out an attic lately and found a basketball autographed by some kid at the University of North Carolina named Jordan? You may want to hang onto that and get it appraised. The original Magic Mike can bring in the big bucks.

Michael Jordan basketball collectables (pictured below) are some of the highest-priced pieces of sport memorabilia because of their high market demand. A game-used jersey from his North Carolina days sold for $114, 000, and his 1986-1987 Fleer rookie card sells for $100, 000 in mint condition and in the $300, 000 range if autographed. Unfortunately, this may also be the most counterfeited card in existence based on price and demand.

Older basketball cards and souvenirs tend to be more valuable, simply for the scarcity. There is plenty of LeBron James memorabilia available on the market costing thousands of dollars, and that keeps the price from heading into the tens of thousands. For example, the game-used jersey from Wilt Chamberlain's hundred-point game in 1961-1962 - yes, kids, Wilt the Stilt scored 100 points in a real live NBA game - recently sold for over $130, 000, while the 1948 card of George Mikan, the gentle giant of the then-Minneapolis Lakers (pictured below), sold for $218, 550.

If you do happen to stumble across basketball memorabilia in your attic or old collection that your eccentric uncle bequeathed to you, the first order of business is to assess its value honestly. For any potentially valuable pieces, it is best to have it appraised by a professional. However, you can do a reasonable first-pass assessment of value using online resources, especially eBay.

Start by understanding what you have. Card values can be looked up online by the card manufacturer (which will be noted on the back of the card) and by the year (look on the back for the last year of statistics, then add a year). Multiple price guides and sports collectable auction sites, as well as eBay, are available for price comparisons. Signed jerseys, basketballs, and old programs can also be priced on those sites.

Do not overlook college memorabilia. Many collegiate fan bases pay top dollar for souvenirs from hometown heroes, even if they never went on to NBA stardom.

Evaluate the condition of any collectibles carefully. It makes a huge difference in card prices at the highest levels. Well-centered cards with sharp corners are preferred, with no creases, scratches or markings, except for legitimate autographs. Look for legibility and location of the signature with signed basketballs or jerseys, and try to establish authenticity by whatever means possible. Otherwise, you leave it in the hands of an appraiser who may or may not have a vested interest in low-balling you.

Your most likely valuable finds are from the 1986-1987 Fleer trading cards set. Unlike baseball cards from that era, basketball cards had been almost completely absent from the market. Topps halted production after the 1981-1982 season, making a Fleer's set full of five years' worth of "rookie cards, " including the Jordan rookie, highly valuable.

Finally, do not assume that it must be a card, an autographed basketball, or a jersey to be valuable. Ticket stubs (especially unredeemed ones) for important games, programs, promotional items, and other objects can have disproportionate value. The card company Upper Deck actually purchased the wood floor from Michael Jordan's final championship game in the Delta Center for a cool $1 million - not that you are likely to find a piece of that in your attic.

To illustrate this point, the most expensive piece of basketball memorabilia sold is not a basketball, an autograph, a card, or a jersey. Dr. James Naismith's original manuscript on the founding rules of basketball sold for over $4.3 million in 2010. Take that, Michael and LeBron.